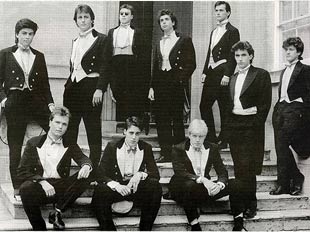 "I was born in an insulated, monocultural environment and it never did me any harm....."

About 30 EDL yobs attacked a Unite Against Fascism meeting at the Friends Meeting House on Tuesday evening, but they failed to even get past the front door.

The meeting was titled In Defence of Multiculturalism in the wake of Cameron's disgraceful remarks a couple of months ago.  Among the speakers were Martin Smith of the UAF Steering Committee and Chris Whitwell of Friends Families and Travellers.

Some good points were made - chiefly that Cameron made the remarks in a desperate attempt to divide communities and divert attention from his government's slash and burn policies.  Questions were asked about Cameron's right to pronounce that "multiculturalism had failed" given his own monocultural upbringing (unless one includes the drinking culture of the Bullingdon Club!).

I spoke from the Stop the Cuts Coalition, and it was a positive move that the links were made by UAF between the crisis and the rise of far right politics.

The EDL thugs were seen off and the police arrived shortly after.  Incredibly, their verdict was that we had provoked the trouble!  Another bizarre interpretation of events by, arguably, Britain's oddest police force.

We finished our meeting, so denying the EDL any claim to have broken it up, and then we left together.

THEY DID NOT PASS!
Posted by Andy Richards at 00:52

I was there and thanks to Andy and the platform for keeping going. As Andy says the links were made very clearly between the economic crisis and the rise, again, of organised racist and fascist groups like the EDL. For this reason especially, Andy's presence on the platform from the StCC was particularly important and I'd like StCC to take an equally clear anti racist and anti fascist position. We must and will fight the cuts but not by giving any comfort at all to any of those who are sympathetic to the far right.

How come the commies need the pigs to protect them? I though you were against the establishment?

Thanks for that account Andy.
I believe we showed that even with an unpleasant mob at the door UAF was able to hold a positive and productive meeting that brought together people from Brighton in intelligent debate on an important issue. It is vital that we continue to organise events to celebrate and defend our multicultural society.

The police turned up late, did nothing helpful, accused the very people who had prevented a meeting being attacked by a drunken mob, (mostly from Portsmouth, very few from Brighton). Nether the less because of our own strategies to protect this meeting no one came to any harm, and the meeting was successfully concluded.

It is crucial we maintain this position of getting 'ordinary people' involved in the work of UAF, and we will continue to keep them safe.

Brighton and Hove UAF's motto is 'Celebrating Diversity' and that is something our whole city can and should do, together.

ATBOTL...the "commies" didn't need the police to protect them did they? They defended themselves quite ably with no help from the police whatsoever.

Are you suggesting that it was improper to call the police, which the management of the venue would no doubt have done anyway?

piggies weren't defending the "commies" as they did very good job of it themselves. You can claim whatever imaginary success you want but fact is that you tried to rush a meeting with 20 of you muppets and you had 5 people defending it successfully, coming off worse. Hows that a success ye moron?
On top of that yer lucky that pigs were not interested anyway, as you would have normally face charges of conspiracy to commit violent disorder and long prison sentences so crawl back to the shithole you came from and get a life before you crawl out again.

Andy Richards
Hi, my name is Andy Richards. I work in local government in Brighton and Hove and I am an active member of my union, UNISON. I am Chair of the Brighton and Hove Branch. I am also a member of Socialist Resistance (the British section of the Fourth International). The idea of this blog is to be a forum for political discussion on local, national and international events...and some other stuff besides. I write here strictly in a personal capacity, not as a representative of any organisations I belong to. Feel free to join in!